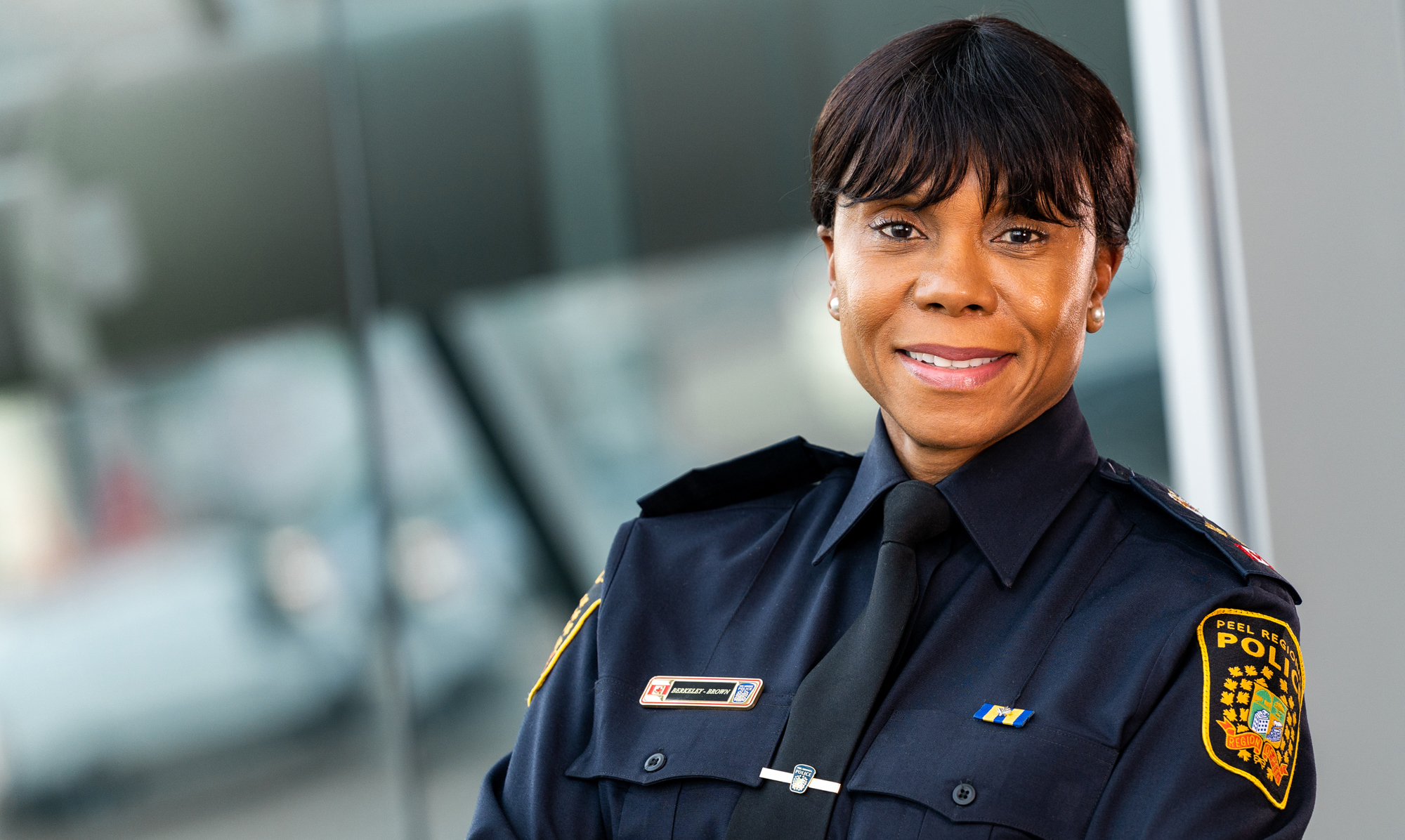 Ingrid Berkeley-Brown didn’t consider herself a role model, even though she was the highest-ranking Black female police officer in Canada. As a Deputy Chief with the Peel Regional Police, she preferred to be a mentor who helped others achieve their goals, whether that was to work in law enforcement or another field.

Even before she became a police officer, she knew she wanted to help people. As the daughter of a police officer in Guyana, she came to Canada at the age of 14. “My goal was to work with youth,” she says, so she volunteered as a probation and parole community resource officer.

As a Black woman in a male-dominated field, she says, “I bring a representation of policing – it’s achievable for other women and members of minority groups.” She was one of only two Black female recruits in a class of approximately 300 at the Ontario Police College, but she never viewed policing in terms of gender. “I am a strong and confident person, so I knew I could do the job. It was a matter of gaining the trust and respect of the other officers.” She says she always felt she was part of the platoon.

After graduating from Seneca College, she continued to take courses for her own personal and professional development. “I always continued my studies to better myself, not just as a police officer but as a person, supervisor and manager.” As her leadership role grew, she enrolled in the MA Leadership program at U of G and graduated in 2014.

Q: What are your personal interests outside of work?

Throughout my years as a police officer, I have always known the importance of maintaining a healthy work-life balance and to achieve that I tried my best to leave my professional responsibilities at the office.  Having recently retired after 34 years in policing and taking time for introspection, I am spending quality time with my recently retired husband, enjoying yoga and assisting my 11-year-old grandson through his virtual learning.

At an early age through the actions of my mom, I learned the importance of giving back to the community and this is a value that has shaped me into the individual I am today.  I am committed to community and youth development and am active on the boards of several not-for-profit organizations.  I also enjoy reading and travelling which of course is on hold during the pandemic.

Q: What is the importance of Black History Month to you?

For me, Black History Month is a time to honour and celebrate the incredible sacrifices, contributions and achievements of Black people. The more I learn about the struggles and suffering of my ancestors, the more I feel empowered to follow in their footsteps and encourage others to do the same.

Although my formal education did not include many references to the experiences, literary works and innovations of Black people, I believe that meaningful and long-overdue work is being done at some institutions to address this major gap in public education. The absence of accurate information enables people to endorse and perpetuate stereotypes that are based on misleading portrayals of Black people in the media.

Black History Month plays a crucial role in our collective efforts to challenge these inaccuracies, dispel myths and remove biases by inviting others to join us as we pay respect to our elders, raise awareness of their experiences and recognize their accomplishments publicly.  This month provides a unique platform for sharing our stories with the wider community and inspiring our youth.

Q: Name something you would like people to reflect on during Black History Month?

I would like people to reflect on the strengths that Canada and the world have acquired through the contributions of Black people and to understand that our history is not only about slavery it is about resiliency, unity, dedication and the ability to thrive in spite of adversity. COVID-19 has provided a unique opportunity to experience our everyday lives very differently from established norms, creating what is commonly being referred to as a “New Normal’ which has placed a greater emphasis on the virtual environment. I would like the wider community to embrace the virtual opportunities provided during Black History Month and connect with, log on, inquire about, and/or participate in the many scheduled events to gain a more informed, historical and factual view of the Black people. This will allow them to take some time to evaluate those experiences and assess the information received to determine what impact if any it had on their understanding. As they reflect, the questions to be asked is, “What role can I play to support racial equity and how can I work to bridge the gaps and reduce the challenges that are experienced daily by those in the black community?”