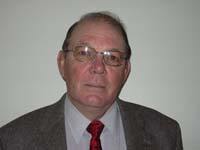 Stan Eby, ADA ’64, is an agribusiness expert, farmer and volunteer who has been called upon locally, provincially, nationally and internationally, to provide leadership and expertise in many different arenas.

Eby grew up on a farm near Paisley and started his community involvement as a young member of the 4-H Club.  As a student at the Ontario Agricultural College (OAC), Eby was active in many clubs, sports, and College Royal. He credits OAC with providing him the skills and confidence he needed to succeed in business.

After graduation, Eby became farm manager at Onondaga Farms near Cambridge. In 1971, he purchased a farm near Kincardine, which evolved into a profitable 70-acre pasturing and feedlot operation. He currently runs a 400-acre pasturing operation and helps his sons with their farming endeavours.

While developing a successful beef operation, Eby began volunteering as a 4-H leader. He became a member of the Agricultural Advisory Committee for Centralia College and served as a Councillor for the Township of Kincardine. He became an elder in his church and was a director and chairman of the Kincardine District Hospital Board.

Serving as vice-president, and later president, of the Canadian Cattlemen’s Association (CCA), Eby became involved in another crisis when a single case of Bovine Spongiform Encephalitis (BSE) was discovered in Alberta. As borders closed to Canadian cattle and beef products, Eby worked closely with government ministries to help lessen the impact on cattlemen across Canada.  He lobbied tirelessly, logging more than 100 flights across Canada and the U.S, in an effort to re-open the trade.

As a past president of the CCA, Eby continues to advocate for Canadian agriculture and the livestock industry. He has been recognized by his peers with several honours and awards.

The University of Guelph Alumni Association named Stan Eby as the recipient of the Alumnus of Honour Award in 2010.