About Us | Alumni | University of Guelph
Skip to main content

Originally built in 1879 as a carriage house for the principal of the Ontario Agricultural College, the building now known as Alumni House was moved from a central campus location in 1930 to make room for Johnston Hall. Wings were added to both ends and the enlarged structure was home for the college's flock of sheep for the next 37 years. When the flock was transferred to the New Liskeard Research Station, the barn was used to store research equipment.

The metamorphosis from rough animal shelter to modern office building and meeting place began in 1978. The Ontario Agricultural College Alumni Association cleaned the building, installed electricity and water and held auctions, corn roasts and occasional meetings there until 1984. 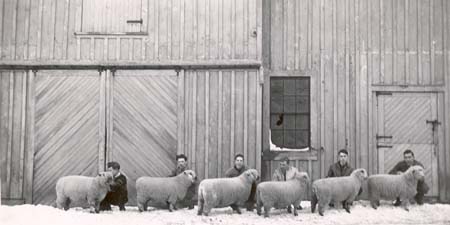 An excellent example of board and batten, timber-framed rural architecture, Alumni House was designated as a building of historical and architectural interest by the City of Guelph in 1984. Two years later, construction began on a new interior and an addition designed by Toronto architects Moffat Kinoshita Associates Inc. Funding for the project was raised through the Alma Mater Fund, the University of Guelph Alumni Association, each college alumni association and the University administration. Alumni House opened in the spring of 1987.

Alumni and friends of the University came forward again in 1995 to support a landscaping and beautification project around the front entrance of the building.

Unique in its design and concept, the former carriage house remains an exceptional example of the co-operative and creative spirit of Guelph alumni, who seized the opportunity to turn a piece of campus heritage into a permanent invitation for University of Guelph graduates to maintain a relationship to their alma mater.

Alumni House is a visible reminder of the important role alumni play in the everyday life of the University of Guelph and it serves as the headquarters for the University's Department of Alumni Affairs & Development.