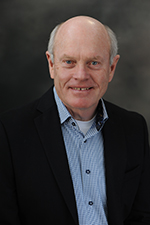 Dr. Roger Thomson (DVM ’75) is a distinguished veterinarian whose humanitarian and volunteer contributions have helped improve lives of both people and animals, in Ontario and around the world.  Dr. Thomson is semi-retired but still enjoys short consulting contracts in the animal health industry. After growing up on a farm in Bruce County, Ontario, he earned his B.Sc. from the University of Toronto in 1970, and completed his DVM at U of G in 1975.

Immediately after graduation Dr. Thomson worked at a mixed animal practice in Uxbridge, before becoming the sole owner of Kincardine Veterinary Services. In 2005 Dr. Thomson sold his practice and joined the Wyeth Animal Health team. Dr. Thomson has stayed involved with his alma mater by serving on the Board of Directors for the Ontario Veterinary College Alumni Association. He also served on the planning committee for, and presented at, the inaugural University of Guelph Global Development Symposium in 2012. OVC was proud to have Dr. Thomson’s representation at the Pan-American Health Organization Conference in 2012.

Dr. Thomson has significantly contributed to professional development of the veterinary profession, through volunteering on the Grey-Bruce Veterinary Association, and serving on the complaints committee of the College of Veterinarians of Ontario. In 2003, Dr. Thomson received the 25 years of Leadership award from Bruce County 4H.  He has been one of the most active class members of OVC ’75.

Dr. Thomson dedicates a significant amount of time to Veterinarians without Borders- Vétérinaires sans frontières. In addition to serving on its Board of Directors, Roger has spearheaded initiatives in Ilima, Tanzania since 2003; his focus on poultry production aims to educate and empower communities to reduce poverty.  He frequently travels to the project site, and allows the project to be locally driven.

The Ilima project was one of VWB-VSF’s first projects, and has become one of its longest running and self-sustaining. Dr. Thomson does not limit his involvement in Ilima to poultry production; he has helped provide resources for local schools, and sponsored individual students so they can achieve their full academic potential. The first time Dr. Thomson visited Ilima Primary School, he found that   few of the students were able to pass the high school entrance exam. In just three short years of his involvement, that number skyrocketed to 75%.

Through these volunteer efforts Dr. Thomson has proven to be adaptable, humble, and inspirational. Colleagues refer to him as a role model in international development, and his students describe him as being impactful and influential. He is considered ‘one of the sons of Ilima.’ Dr. Thomson has truly been a leader within the veterinary profession.

It is with great pleasure that the University of Guelph Alumni Association names Dr. Roger Thomson as the recipient of the 2013 Alumni Volunteer Award.