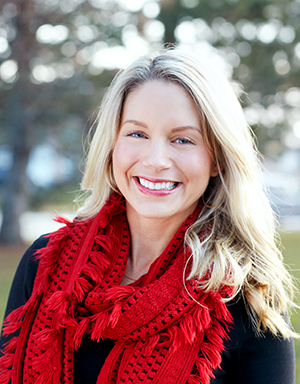 Angela Liddon graduated from the University of Guelph in 2006 with a BAH in Psychology. She is the founder of the popular plant-based blog, Oh She Glows, two internationally bestselling cookbooks, and an award-winning recipe app. After earning her master’s degree in social psychology, she worked as a child development researcher before leaving her field to pursue a new dream.

Angela launched the Oh She Glows blog in 2008 as a way to chronicle her recovery from over 10 years of disordered eating and how she became more connected to the food on her plate. She gained a loyal following as the food-as-lifestyle movement was taking off. She also launched a business – Glo Bakery – hand-making more than 500 of her famous vegan Glo Bars each week and selling them a the local farmer’s market and online.

As her relationship with food continued to improve, she fell in love with how much energy she had eating a plant-based diet. Angela developed healthy and accessible recipes that appealed to her growing audience. Not only did she teach herself how to cook, but she also learned how to style and shoot food photography. In 2010, after finishing in the top 3 of an international food blogging competition, Angela was approached by an editor from a major publishing house, inquiring whether she wanted to write a cookbook. She closed her bakery to focus on her blog and cookbook development. The Oh She Glows Cookbook hit the shelves in 2014 and is a New York Times Bestseller and a Chapters/Indigo Book Of The Year. It features more than 100 plant-based recipes (including 85 gluten-free recipes) using accessible, whole food ingredients. The book also contains over 100 full-page, full-colour photographs shot by Angela. Her goal is to inspire people to embrace more plant-based foods in their diets without feeling the least bit deprived.

The Oh She Glows Cookbook is now printed in several different languages including English, Chinese, Slovak, Spanish, Hungarian, and German. Angela continues to connect with men and women all over the world who attribute their life-changing habits — like losing weight, shifting to a plant-based diet, reducing meat consumption, and following their passions — to Oh She Glows.

Angela’s second cookbook, Oh She Glows Every Day, was published in 2016 and became a New York Times Bestseller. Both her book and her blog, OhSheGlows.com, received gold prizes in the Taste Canada Awards. Combined, Angela’s cookbooks have sold over 1 million copies. In 2016, she also launched The Oh She Glows Recipe App, featuring over 150 of her most popular plant-based recipes and stunning food photography. Her recipe app won a prestigious 2019 Webby Award for Best Food and Drink App and demo versions are featured in Apple Stores across North America.

In 2018, Angela was selected as one of Canada’s Top 100 Most Powerful Women and recognized for her entrepreneurship and inspiring influence across the country.