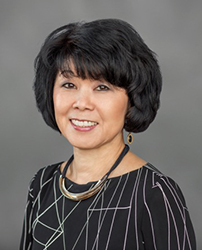 Karen enrolled in the consumer studies program with a business minor at the University of Guelph, and graduated in 1976. She went on to the MBA program at York University. The Alumni Volunteer Award is given to someone who has demonstrated loyalty and commitment to their alma mater through their volunteer work. But we would be remiss if we didn’t tell you a little bit about Karen’s incredible achievements in the world of business.

After receiving her MBA, Karen was recruited by Carnation, where she worked in sales and marketing. In 1981, she joined what was then known as Ralston Purina, where she worked in marketing until she was appointed president in 2000. Two years later, the company was acquired by Nestlé and became Nestlé Purina PetCare Canada.

Karen’s climb up the corporate ladder was no easy feat.  As a female CEO of a Fortune 500 company, Karen joined a very small and exclusive group of business leaders. In 2015 there were only 21 women acting as CEO of a Fortune 500 Company. Karen’s reputation for leadership and excellence in business allowed her to excel in her role and to be an inspirational role model for other women.  While Karen retired in 2013, she has certainly left her mark on the Canadian business world.  The College of Business and Economics recently honoured Karen as one of its Notable Alumni.

As a busy executive, Karen still found time to devote to her alma mater. In fact, her FACS 76 Class Reunion is being held this weekend, and Karen volunteered to be the reunion leader, along with classmate Mary Trudelle.

Karen has held many roles and served in many ways over the years. She was a member of the Universities’ Board of Governors from 2007 to 2012 and on the Board of Trustees form 2012-2013. In 2008 Karen volunteered to chair the board’s Pensions Committee. After the economic downturn of 2008, and changes in legislation that affected university pensions,  this was a role that required someone who could handle the technical requirements, but also take an open and engaging approach to conversations with stakeholders. It was not an easy role to fill, but Karen took it on and handled it with aplomb.

Karen was also asked to be a member of the University’s Ad Hoc Working Group on Responsible Investing in 2015. She was a member of the Campaign Cabinet for the The Better Planet Project — U of G’s $200 million fundraising campaign, the most successful in its history.  Karen served on the College of Management and Economics Advisory Board (now the College of Business and Economics) during its formative years.

As a bridge builder and door opener, Karen has been a champion for the University, and invited her networks to get to know the U of G and its amazing work. She was instrumental in establishing the Nestlé Purina PetCare Canada Chair in Communications through a $1 million gift to the Ontario Veterinary College. The Chair supports research, communications and an outreach program to address positive behavior training, pet overpopulation and pet abandonment.

Volunteer involvement is a way of life for Karen. She has committed time and service to countless organizations, including the Japanese Canadian Legacy Project, the Association of Canadian Advertisers, Peel Region United Way,  Big Sisters of Toronto and Canada,  Food and Consumer Products of Canada, and York University. She also worked on the Modernization of Income Security for Working Adults Task Force, to bring about change in policy and society.

Since retiring in December 2013, Karen has managed to find time for travel to destinations Norway and Iceland and has continued her volunteer work with the Toronto 2015 Pan Am Games, the Japanese Canadian Cultural Centre and on her condominium board and social committee. .