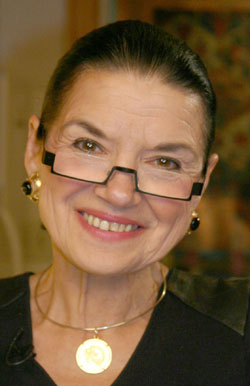 Margaret Dickenson, B.H. Sc. ’68, came to Guelph to attend Macdonald Institute and completed a four-year Foods and Nutrition degree. After graduation, she married Larry Dickenson, B.Sc. ’68. Mrs. Dickenson accompanied and supported Larry in his diplomatic career, taking her to eight countries in 28 years and entertaining tens of thousands of guests.

Over the years, Mrs. Dickenson established a strong international reputation for her creative entertaining and unique recipes. In 1998, her cookbook “From the Ambassador’s Table: Blueprints for Creative
Entertaining” was named best cookbook on entertaining at the World Cookbook Fair in Perigueux, France. In 2002, Mrs. Dickenson created, wrote and hosted an award-winning cooking and lifestyle TV series called “Margaret’s Sense of Occasion.” She also created the series called “Margaret’s Entertaining Minutes.” Her new TV series,
“Margaret’s Table,” was released in early November 2010.

In September 2006, Mrs. Dickenson released her second cookbook “Margaret’s Table – Easy Cooking & Inspiring Entertaining.” In 2007, “Margaret’s Table,” won four major international awards, including the “Best of the Best Cookbook in the world in the past 12 years” in the
entertaining category at the Frankfurt Book Fair.

In 2009, Mrs. Dickenson was named “Culinarian of the Year” by the Cordon d’Or International
Culinary Awards. In September 2010, Ottawa Life Magazine announced “The Tenth Annual TOP Fifty People in the Capital”. In saluting Margaret as one of the top 50, the magazine referred to her as “Ottawa’s Julia –– a culinary ambassador for Canada”!

Mrs. Dickenson has established herself as a creative recipe and menu developer as well as a food stylist, which has garnered her dozens of international awards. She also takes a very active role in supporting a broad range of charities and is a volunteer for U of G’s Ottawa chapter. Margaret was recognized in 2003 as one of 76 recipients of the Macdonald Institute’s Centennial Awards. She is a member of the International Association of Culinary Professionals, Cuisine Canada and the Ontario and Ottawa Home Economics Associations.

Copies of “From the Ambassador’s Table: Blueprints for Creative Entertaining” and “Margaret’s Table – Easy Cooking & Inspiring Entertaining” can be purchased online at www.chapters.indigo.ca. 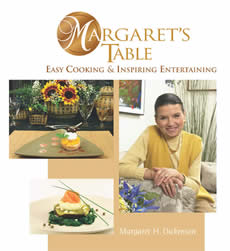