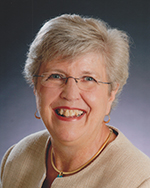 Ms. Mary Bush (B.H.Sc. ’70, M.Sc. ’75) ) is a pioneer in the field of nutrition and public health, and her tireless work has directly impacted the lives of millions of Canadians. She graduated from the University of Guelph in 1970 with a Bachelor of Household Science in Foods and Nutrition, and returned for a Master’s of Science in Consumer Studies, finishing in 1975. Ms. Bush retired from the Office of Nutrition Policy and Promotion, Health Canada in 2007.

Immediately after graduating with her B.H.Sc., Ms. Bush worked as a Food Specialist for Health Canada. After returning to U of G to complete her M.Sc., Ms. Bush worked in a variety of positions at public health agencies like Health Canada, Nutrition Educon, the National Institute of Nutrition, as well as the Ottawa Carleton Health Unit. Her career with Health Canada began in earnest in 1990, and she spent the next two decades serving in roles with progressive responsibility.

During her time with Health Canada Ms. Bush was a key player in developing nutrition labelling, distributing a guide on Dietary Reference Intakes, as well as creating successive versions of Canada’s Food Guide. Before retiring, Ms. Bush served as the inaugural Director General of the Office of Nutrition Policy and Promotion for Health Canada, which due to her contributions is viewed as the authoritative source for nutrition and healthy eating policy in Canada.

Throughout her career Ms. Bush was very active serving on boards such as the Canadian Dietetic Association, the Ontario Dietetic Association, and the Ottawa Home Economics Association. In 2008, Ms. Bush received the Dietitians of Canada’s highest honour, the Ryley-Jeffs Memorial award, in recognition of her dedication to the profession and a proven ability to chart new directions in the field of dietetics. The Canadian Public Health Association awarded her their Certificate of Merit in 2007. She was also the 1977 recipient of our U of G Alumni Medal of Achievement.

Ms. Bush has generously dedicated her time and energy to numerous community organizations such as Harmer House, Hopewell Eating Disorders Support Centre, and Christ Church Bell’s Corners. In addition to her extensive involvement in her local community Ms. Bush has supported students at her alma mater by creating a student bursary through the CSAHS Learning Opportunities Trust.

Ms. Bush is looked up to as a visionary leader whose capacity to focus, balance, and inspire is legendary. Her peers laud her as an exemplary public servant with terrific interpersonal skills, who serves as a conscience within the nutrition profession.

Ms. Bush chaired a Task Force on Dietetic Education in Ontario, served as a member of the Science Advisory Board for Agriculture and Agri-Food Canada, as well as the Canadian Partnership Against Cancer: Primary Prevention Advisory Committee. Her accomplishments truly embody the University of Guelph’s mission of ‘Changing Lives, Improving Life.’

It is with great pleasure that the University of Guelph Alumni Association names Ms. Mary Bush as the recipient of the 2013 Alumna of Honour Award.